Grail Structure and its Purpose in The Waste Land

As an interesting sort of twist of legends and responsibility, Eliot assigned blame to the Fisher King for the sickness of the kingdom only once in the poem, drawing heavy parallels between the state of the waste land and scenery from the trenches of  World War One. He writes, "Musing upon the king my brother's wreck, and on the king my father's death before him. White bodies naked on the low damp ground and bones cast in a little low dry garret, rattled by the rat's foot only, year to year," (Eliot, lines 191-195). In the narrators eyes, the King and his sickness—which has become the sickness of the land and its people—are responsible for the fall of his brother and father. Their dead bodies rot away, and their bones are improperly buried, simply lying uncovered on the dry, inhospitable earth. Scavengers crawl over them, taking away what little dignity unscathed dead bodies could have to begin with. This passage carries direct applications to the First World War. The narrator essentially blames the leader of his country for sending his father and brother off to fight in the trenches. Their bodies are stripped of all useful goods after they are killed in combat. They are left to decay on the "damp ground" or in "low dry garrets", with no one coming to find them so that they can be buried formally. Eliot explores the anguish and anger of survivors of the war, and how they were left to cope when many of their loved ones never came back—often blaming their governments for the devastation wrought on the land and its people. He uses the Fisher King and the waste land to paint a picture of the kind of hopeless desolation they felt after everything ended.

Another member of The Waste Land's cast is key to the structure of the Grail quest and the theme of reliance on mystical forces for recovery. She is Madame Sosostris, who reads tarot cards to determine the narrator's future. The tarot deck, like the usual deck of cards, has four suits. They are the Cup, the Lance, the Sword, and the Dish—the same four symbols are called the hallows of the Grail Castle, where the Holy Grail lies in wait protected by the Fisher King (Griffin, 77-94). They represent the pillars of the quest for the Grail. This tie that immediately suggests a bond between gypsy mysticism and the Grail quest has a deeper meaning still. Originally the symbolism of tarot cards has been connected to designs found on ancient Chinese and Egyptian monuments whose purposes were linked to the change in the water levels of great rivers (North, 36). This ties directly to the great theme of water in the poem, and the idea of water as being life-giving—to be discussed later. 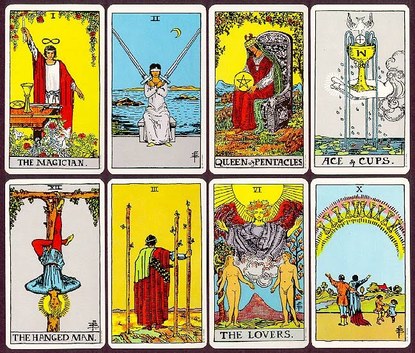 Eliot uses destruction imagery in The Waste Land to symbolize the extent that countries were ravaged and sick after the war. The only way for him to accurately portray how Europe had been affected was to describe the barren lands of the Fisher King. Eliot writes, "Out of this stony rubbish, Son of man, You cannot say, or guess, for you know only A heap of broken images, where the sun beats, and the dead tree gives no shelter, the cricket no relief, and the dry stone no sound of water," (lines 20-24). The "stony rubbish" he describes is the wreckage of great buildings, fallen after countless bombings. "Images" of the past—the perfect cities and homes that had been thriving pre-war—were smashed to bits along with the physical landscape. Even the memories of soldiers were scattered and broken as a result of trauma. The people were needy, but no one could help them. The governments of Europe post-war scrambled to pick up the pieces and promote diplomacy, and just didn't have the time to help all of their people recover. They were dead trees—they existed but could not provide relief. The people were in search of water, some great force that could lift them up from their misery and help them regain their vitality, but none was to be found in the rubble. The scenery of The Waste Land is powerful in that it shows how the fundamental needs of Europe's peoples were not being met—making their recovery slow and painful. 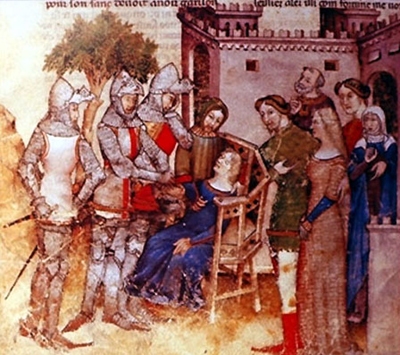 "I sat upon the shore
Fishing, with the arid plain behind me
Shall I at least set my lands in order?
London Bridge is falling down falling down falling down
Poi s’ascose nel foco che gli affina
Quando fiam uti chelidon—O swallow swallow
Le Prince d’Aquitaine à la tour abolie
These fragments I have shored against my ruins
Why then Ile fit you. Hieronymo’s mad againe.
Datta. Dayadhvam. Damyata.
Shantih     shantih     shantih"
(Eliot, lines  423-433)
Eliot's final words, "Shantih Shantih Shantih," translate loosely to "The Peace which passeth understanding," (Rainey, 126). He ends his lamentation of the state of the world post-war with a call for a higher peace—and through this peace, recovery.
Powered by