A Brief Grail Story: One of the Many Interpretations of the Quest for the Holy Grail

Perceval is a young Welshman who has been raised in the forest by his mother. Much of their family has been killed in knighthood, so she shelters him from the world of chivalry and conflict, focusing on making him a good Christian. He knows how to use a javelin, but is not skilled in combat.

Practicing with his javelin in the woods, Perceval comes across a group of knights. At first, he thinks they are angels, but soon thinks better of this and asks them about themselves. It is this encounter that convinces Perceval he must become a knight, so with little training he takes off to Camelot and Arthur's court.

In his travels, Perceval stumbles upon the Fisher King's castle. He eats a banquet with the old King, and a beautiful holy cup is passed in front of them three times. Perceval is curious about the cup, but restrains himself from asking any questions about it—taking the advice of an old knight from his travels who had warned him that curiosity could make a man seem ignorant and impudent.

In the morning, Perceval wakes up and the castle is barren. He leaves to go back to the woods and runs into a woman who tells him angrily that because he did not inquire as to what the Grail was, the quest was not completed, and the Fisher King and his Wasteland are sentenced to remain in their state of desolation (Griffin, 21-22). 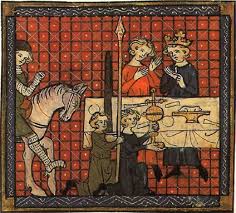